For introduction see first Part. This Part is about actually setting up an openFrameworks project with NetBeans.

After the steps above, Netbeans will build the project automatically (remember that checkbox?). As we asked it, it uses the basic “make” approach, no Netbeans-specific settings. While doing so it anyway scans the dependencies and learns about the structure – not only of you project, but of all involved basic classes and mehods. So after the build you will have fully functional IDE-behaviour, including the most important thing: auto completion / suggestions: 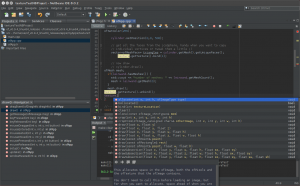 Addons  As mentioned before, the beauty of this approach is that you use the basic make process unaltered. This applies for adding an addon to your project, too: – Add the name of the addon to addons.make – Add the header to your ofApp.h  After doing so, you will notice that there is no Auto completion for the methods of the addon. Also NetBeans is complaining about the missing header file – again the one of the addon: 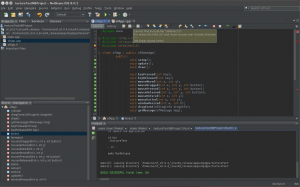 Remember that NetBeans scanned everything during the building process and so did not learn yet about the new addon. So just do a build again. As you included the header file, NetBeans will scan the according files and after the build you will have auto completion for the addon methods also: 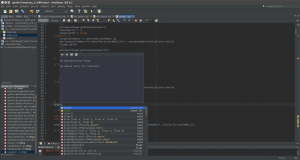